Seriously, just look at her: 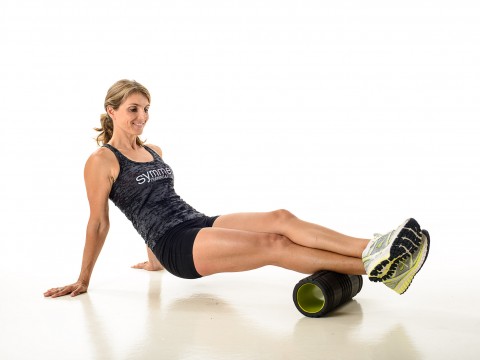 Doesn’t she look like she’s enjoying it? It almost looks like a fun game. Now my mileage is on the up, i thought it prudent to try some rolling; also to use words like prudent to sound more authoritative about such things. A couple of years back I had two or three months with a recurring calf strain and I’m determined that it’s not going to return to spoil my marathon party.

On Googling ‘foam rolling of calf muscles’ I was confronted with images similar to that above which only implied that the whole experience would be a pleasure. I couldn’t wait to get started.

It looks fairly inoffensive doesn’t it? I don’t think I’ve felt so misled since I found out Lassie wasn’t real. Granted, it works as a perfect ‘donker’ on an unsuspecting wife’s head but then you have to actually use it to help your muscles recover!

You’ve seen the picture at the top; Miss Smugface. I set myself up, lay back and propped myself up with my arms, as demonstrated by our guide above, then lifted my calf on to the foam roller. It even sounds playful: foam roller! All that remained was to lower myself to allow my calf to slide along the roller.

Imagine, if you will, what it would look like if you saw someone lowering themselves into a bath of hot oil. Or if that same person stepped out of the bath, barefoot, straight on to a plug. A ‘prongs up’ plug too. Now imagine they have my face. That is what I tend to look like.  That is not what she looks like.

I only roll my calf along the roller 6 or 7 times for each leg, then the same on the side of my thigh to help the IT band* but that is enough.  The premise is that rolling realigns the muscle fibres, allowing them to rebuild and recover more quickly.  I honestly think I felt every individual fibre being aligned.

Do you know, I may not look particularly aesthetically pleasing, fairly monstrous in fact, but it bloomin’ works. The next morning I genuinely feel like I’ve got new legs. Better legs too, stolen from someone who didn’t punish theirs the previous day with unforgiving runs.

There are hundreds of youtube videos to plough through with tried and tested techniques so I’m not going to try and talk you through any. However, I can’t recommend them enough. Just don’t try it first in public.